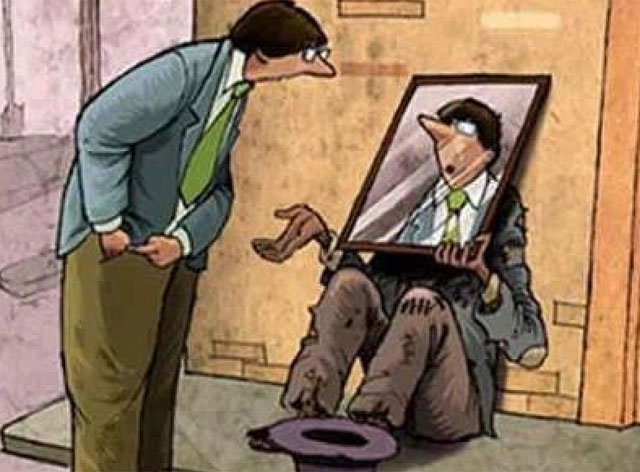 The Man Behind the Mirror

“What are you comedians really like?” I’m often asked. It’s a deceptively complicated question. We work with professionals who leave their personal viewpoints at the door. But to know comedians personally is a vastly different experience.

1. Onstage, comedians like to question basic assumptions basic.
(Shouldn’t we be saying ‘I COULDN’T care less?’ instead of ‘I COULD care less?’)

2. Onstage, comedians like to tell uncomfortable truths.
(I’ll tell you why I didn’t think you 2 were together. Because you seem into my flirting and he seems 90”)

Many people praise comedians because the 'challenge' muscles most of us have left behind in adolescence have stayed intact. Comedians, by contrast, continue to think like 6-year-olds. …
6 year olds with the brains of college graduates.
So when we say something awkward…it’s usually on purpose.

A comedian’s spouse will tell you truthfully that our ‘unwillingness to compromise’ is really our inability to…grow the heck up! So if you like ‘babysitting’…marry a stand-up!

Care to dig a little deeper?

3. In a comedy club, a comedian gets to ‘worship at the comedy alter’ where the ONLY sacred thing is the joke; not family, not community, not tradition. The country’s going to hell? Allow him to make it seem worse. You got a speeding ticket, clocked at 90? Good, he says! Not maliciously. But because…

4. A comedian’s natural enemy is arrogance. Sitting up front at a comedy show because you think your choices can't be mocked, is like spreading meat on yourself and walking through a lion preserve. A “6-year old wonder machine” becomes a surgical ego-crusher in no time, flat.

After 35 years of knowing a ton of gifted comedy minds, here’s my take on this elusive answer:

Imagine a person with above average intelligence, above average creativity and above average language facility. But ALL they’re interested in is getting laughs; pursuing the chuckle in lieu of the big house; focusing on laughs, not so much on responsibilities.

A comedian is frankly, an addict. But their drug is your laughter. Comedy is playfully great when it ferrets out our human foibles (silly things we ALL do). But its highest gear is reserved for the reminder that we’re just ridiculous carbon life-forms clinging to a planet that’s spinning at thousands of MPH!

Once at a Hollywood party, a girlfriend and I were chatting with a comedy writer. After being asked, I told him I’m a stand-up comedian. He said, reflexively: “Oh…that’s a dark pool”.

My gal laughed out loud…and laughed hard. In “stand-up” we call that, the laughter of recognition.