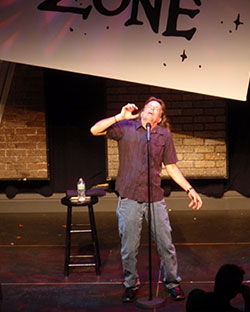 Entertaining audiences all over the country since 1990, Frankie Paul is fast becoming a prominent force in the world of comedy! He has a unique knack for taking a typically unnoticeable situation and placing it to new levels of hysterics! From fishing, scuba diving, and female body builders to marriage, kids, and how we choose the animals we eat. Frankie Paul hits them all from angles you know but never see coming! All done with an unstoppable high energy delivery!

Frankie has had numerous TV appearances on FOX NBC and Comedy Central as well as dozens of radio shows. He’s performed live in all the top comedy clubs and theaters around the country and abroad!

Once you see Frankie at a Comedy Club in your town, you'll want to see him again! You will want to bring new friends to enjoy this incredible show! His facial expressions alone will have you rolling! With an animated appearance and a positive edge, Frankie Paul takes his crowd on a silly roller coaster ride of uproarious laughter. Don't miss him!!