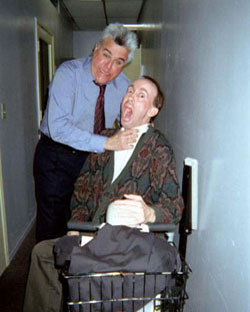 The comic whose fans include Jerry Seinfeld, Jay Leno and Brian Regan!

For 15 years, Brett was considered one of the very top standup comedians, by experts in the field.

In 1998, in response to his increased physical challenges, Brett added motivational speaker to his already impressive skill set. And it was clear immediately that he'd found is calling.

By combining his standup act with personal stories, into what others have called 'philosophic lecturettes', Brett has delighted conference attendees for decades now.

Programmers who want a playfully gentle program are his biggest fans. Brett has appeared at the Smithsonian, the Kennedy Center, and the world famous Wolftrap concert venue.

The first disabled comedian to appear on NBC's The Tonight Show; Jay Leno had this to say about Brett: "He broke up the whole room." Several more appearances, followed.

Other television appearances include Entertainment Tonight and the American Comedy Awards. In 2003, PBS stations around the country began running his hour-long comedy special "Laughing Matters with Brett Leake."

Brett, like Jerry Seinfeld, is a shining example of what opportunities are available to a talented comedian with a strong work ethic, who stays true to his vision.