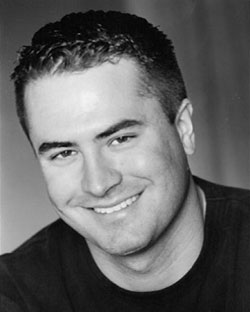 Quick stories & impressively original spins on his own ideas: "Unless you're in a pie-eating contest, marijuana is NOT a performance-enhancing drug!"

What is your favorite comedy style: storyteller or one-liners? If you said both, Chris is your kind of comic!

Everyone is fair game for his sarcastic observations... even and especially...his own self: "If you want to pass out candy to children on Halloween, make sure you do it from a house!"

Chris has been referred to as a "comic encyclopedia" as well as a social commentator: "I saw a sign that read, 'KIDS EAT FREE'. So what? They always do!" I've never seen an 8 year old pull out his wallet at an IHOP and say to his parents: "Mom, Dad...I got this"

Chris grew up in a traditional middle-class white family in Los Angeles, where he eventually received a bachelor's degree in history, followed by a masters degree in psychology: "Don't get revenge against your parents in a way that messes up your life. Just let them pay for 7 years of college, then become a stand-up comedian!"