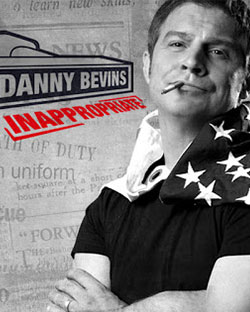 Danny Bevins has appeared on NBC's 'The Leeza Show', as well as MTV's 'The Jenny McCarthy show'. He partnered with Andrew "Dice" Clay on his 14 city tour.

He’s appeared in the US Comedy Arts Festival and was the 2000 winner of the San Francisco Comedy Competition; the most prestigious comedy contest in the country. His comedy work centers on pushing back on authority and temptation.

His comedy is featured in "A different Kind of Bad", featured on Stand Up! Records. His other releases are "Salty Language, Peppered Morals", "The World Stands Up", "Billy Gardell Presents Road Dogs: Chicago" and Red Light Comedy: Live from Amsterdam.

As an actor, Danny Bevins was involved in "Sullivan & Son" and "The North American Smoker". He produced the TV series, "American Wiseass".

Bevins’ “The World Stands Up” won the Comedy Central Producer award. He was the star of the award winning documentary "Comic on Duty- We Love You Mrs. Bevins". He’s appeared on The Jameson Comedy Tour.

But his big mouth has gotten him into trouble on a number of occasions. He’s been arrested, fired from jobs and even fined. Some comedy lovers find him loud, ridiculous, opinionated, sarcastic, dangerous, irreverent and cocky.

He maintains a devoted following. His charming character and innovative performances continue to draw and delight audiences. Those who love comedy based on challenging authority and succumbing to temptation are Danny’s biggest fans.