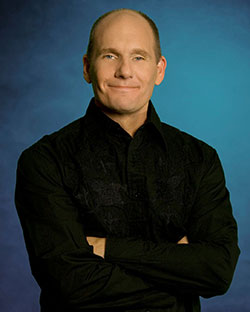 David Crowe is a 20 year veteran of the comedy stage.  After winning both the Seattle and San Francisco Comedy Competitions, then performing for a US President the same year, his career took off and has never stopped.

On stage Crowe is armed with a "gallery of facial expressions", a host of accents and a "nerdy charisma that is utterly captivating."

He has been featured on Showtime with his own One Hour Comedy Special "Crooked Finger," along with numerous appearances on Comedy Central, Bob&Tom Radio, SiriusXM and Pandora.  Overseas, he crushed the competition at the Edinburgh International Fringe Festival garnering three perfect 5-Star reviews from their rather sticky and jaded press (you can read them here in the Testimonials section)

David is a guaranteed hit on the corporate entertainment circuit.  He has performed at literally hundreds of corporate and private events across the United States and Canada.

He recently concluded a nationwide comedy tour for Investors Group, a financial services company, where he performed for over 60,000 of their most valued clients in 60 different cities.   To date, David has released five comedy albums.   He believes the best way to stay sharp and relevant is to continue to hone and perfect new material at comedy clubs across the country with the goal of releasing an new comedy special every few years.