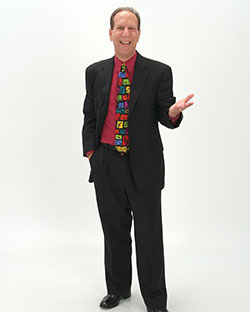 David has been a professional comedian and entertainer since 1985 and has presented over 2000 programs. He has appeared on “Evening At The Improv” and several other national television shows. He has been the opening act for stars such as The Beach Boys, Engelbert Humperdinck, Ellen DeGeneres, Ray Romano, and more.

David worked with Steve Martin on a comedy project for CBS-TV and has performed at private parties for singer Gloria Estefan and former President Jimmy Carter. In 1994, he was voted “Funniest Person in America” in the Entenmann’s National Comedy Contest.

In addition to performing his “Laughing From Right To Left” show for Jewish groups, David also performs programs for many corporate audiences. He specializes in customized business humor and is an expert in “finding the funny” in the many Fortune 500 companies to whom he has spoken.

He is an active member of his synagogue’s volunteer choir—where he is not permitted to change the words to any of the songs.