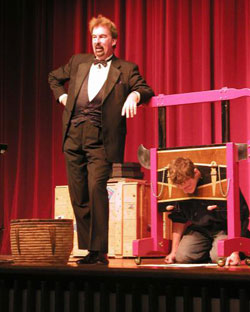 A musical written around David called "It Must Be Magic", ran for 60 sold-out performances, at Milwaukee's Pabst Theatre!

David's "Wonders of Magic" has been presented in over thirty states, coast-to-coast, and is a lavish production with beautiful settings, spectacular illusions, colorful costuming, and evocative music.

He regularly performs for many private functions and at popular public events; including since 1980- twice nightly at Summerfest, the world's largest music festival.

He has been flown to Europe to perform for international sales forces of major corporations.

He's combined his love of classical music with magic to create The Maestro & The Magician, a concert attraction that has appeared with notable orchestras in California, Hawaii, Arizona, and Texas as well as with the Buffalo Philharmonic, Syracuse Symphony, and Rochester Orchestra.

David and his staff created "Illusions in the Night"; perhaps the only elaborate magic and illusion show designed to scare an audience. The show -and its ghosts-have traveled to several areas in the US.