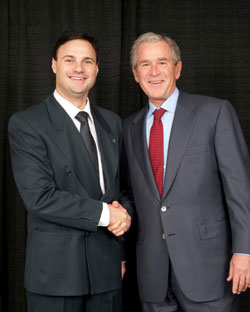 An old fashioned conservative-as equally at home in a church as a saloon.

Dez Reed, a former member of The Canadian Armed Forces and combat martial artist, turned stand-up comedian, has risen up the ranks in the comedy industry. He has headlined all across North America, including A-list comedy clubs.

Dez is one of the most accredited comedians on the Canadian comedy scene. Trained in improvisational comedy at The World Famous Second City in Toronto, legendary starting point for Mike Myers, John Candy and many more, Dez employs his improv skills as a stand up, making every show different from the last. One is never sure what topics Dez will hit upon during any given show, but you can be sure that it will always be entertaining.

Because of his pro-American views, the Canadian government encourages all US-based organizations, clubs and charities to hire Dez and to keep him touring outside of Canada for as long as possible