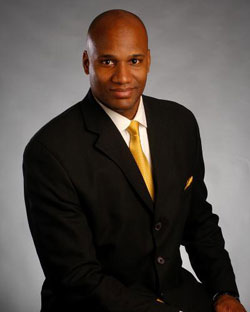 Eric Anderon served his country honorably in the Air Force and emerged in civilian life as an inspiration to those who encounter this remarkable man.

He has entertained 2 Presidents and several Governors.

He was the featured show for the 1996 Atlanta Olympic games, and was selected to perform at the NFL Players Association's Super Bowl party.

As if that side of him were not enough, he was also a "Funniest Person in America"-semi-finalist!

His historic "Blindfold drive across America" was covered on all the major news outlets.

But Eric doesn't just offer mentalism and magic shows. His life-story has enthralled hundreds of motivational audiences. He incorporates some magic to accompany a story and a message that inspires programmers to tell us..."He would have been a good value at TWICE the price"

Eric Anderson. When you want to turn your event into a gala happening.