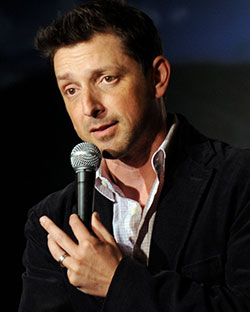 Hailing from both Northern and Southern California (depending on who he is trying to impress), James P. Connolly is a stand up comedian and radio/TV host known for his playful, confident style and unique sense of humor.

James’ attended Harvard University on a Marine Corps ROTC Scholarship, which left him feeling “wicked smart”, but possessing the skills to hurt people who are “actually” smart.

While serving in Desert Storm, he was ordered to write jokes for a Colonel. Understanding this to be a lawful and punishable command; James erred on the side of funny.

Eventually making his way to Hollywood, he began to perform at the World Famous Comedy Store, the World Famous Improv, the Legendary Ice House Comedy Club and other major comedy venues with too many adjectives. Soon James popped up on television, commercials, and in small films.

In addition to having appeared on Comedy Central and HBO, James hosted VH1’s “Movie Obsessions” and more recently “Live From Here” on XM Radio for National Lampoon. He is recognized across the country as one of the most played comedians on the Sirius XM

Comedy Channels and is a frequent guest on the nationally syndicated Bob and Tom Radio Show. James has also made multiple trips overseas to entertain the troops.

His latest CD “The Master Plan” debuted to rave reviews on XM Radio’s Comedy Concert Series and has been called “captivating” and “laced with intelligent humor, edgy opinions” and “leaves them (the crowd) hanging on his every word!” James also wants you to know you he has a very manly voice.