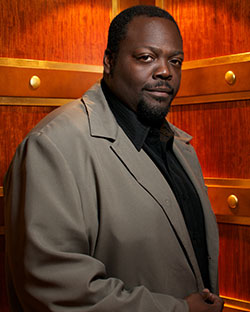 James Ibn Muhammad is not only a great Comedian… he is also a great Contrarian: "Even if you agree with me about something, it's not for the same reasons." But what is not up for debate are the audience reactions to this Ohio native. His instant likeability and dynamic presence belie his edgy and refreshingly original material.

He speaks to every kind of audience, but never compromises his distinctive comedic "voice”-- which is why he is a hot commodity in clubs, colleges, theatres and corporate events worldwide.

Born and raised in Dayton. Ohio, Saleem has much in common with the city's famous aviation pioneers Orville and Wilbur Wright. "Like the Wright Brothers, the minute I could, I flew out of Dayton too..." the comedian quips. "I rarely go back.... mainly because my family still lives there."

But the sky’s the limit for Saleem, and he’s well on his way to those heights. His credits already include appearances on "The Tonight Show", NBC's "Last Comic Standing", FOX's "Best Damn Sport Show...Period" and BET's "Comic View.” He has toured with music greats "The Temptations", "Boys II Men" and Vanessa Williams as well as with comedy legends such as George Carlin, Joan Rivers, Chris Rock, Adam Sandler, Kathleen Madigan and Gary Shandling.

An actor in his own right, you may have seen Saleem on ABC's "Sons & Daughters", Universal’s "Blind Date" or in a host of commercials including "Foot Locker" and "Pringles". Or maybe you’ve heard him hosting on Sirius Satellite Radio’s "Blue Collar" channel. Saleem also wrote and directed York Entertainment's parody of "The Terror", and he tours the Middle East for several charity organizations.

Regardless of where he performs Saleem's confident, clean and irreverent style places him firmly in the "Must see!" category of comedians today. Check him out!