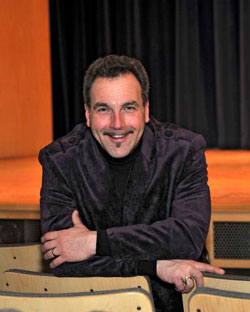 His hypnotism expertise is just the beginning of the full Jeff Bibek experience! Read more...you'll be quite surprised.

Double-threat Jeff Bibik has been amazing and entertaining audiences for over 30 years. His interest in hypnosis began in high school when he was hypnotized at a magician's convention. This started a lifelong fascination with the workings of the human mind, and he became a student of the mysterious. He performed magic and mind reading throughout his college years while getting his BA in Theater and Communications from Eastern Michigan University.

His professional career has seen him perform in almost every type venue from theaters to corporate events to the high seas to Las Vegas. His lifebreath hypnosis series is a powerful tool which has helped many people eliminate old habits, fears and phobias, allowing them to move forward and live life to its fullest!

The show, ?The Jeff Bibik Hypnosis Experience? takes a group of audience volunteers on a wild ride through the subconscious mind, where everything is real and anything is possible! It is always in good taste; Bibik treats his audiences and his volunteers with respect. Along the way, everyone learns valuable relaxation techniques they can begin to use at once to make their lives a better place. It?s entertaining, mystifying educational, and most of all, FUN!

But there's another side to this amazing man! You see...

....only one person believed Jeff Bibik when at the age of 7 he told his family that he had risen out of his body the night before and watched himself and his brother asleep below him. It was his Grandma Helen that told him it was not unusual, and that anyone could do it, if they allowed it to happen. She was a gifted psychic and regularly went to ?the other side?. This inherited ability later became evident in Jeff as he seemed to know what people were thinking, or had a sense about people that was uncanny. He developed a power to 'see' without looking, to 'know' without being told.

He has taken this skill to the stage, where he demonstrates the incredible power of the human mind. We are all a part of a universal mind, and Jeff is able to tap into that at will. He may reveal a secret thought, tell you if you're lying or telling the truth, he even seems to know what you're thinking before you yourself know!

It's an incredible display, and, as Grandma Helen told that little boy so long ago, anyone can do it if they want to. Jeff shows you how to claim the psychic power you already possess. That is why he is also known as "The Amazing Mr. Bibik".