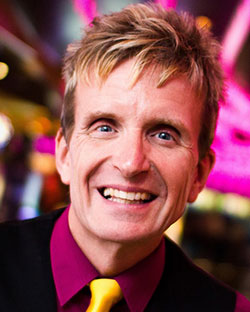 Jeff Shaw is a stand-up comic. His writing is marked both by idealism and humanity. His stimulating satire is often infused with a singular poetic beauty. More important, he looks like Rod Stewart.

Over the past 30 years, Jeff has performed nearly 9,000 shows across North America and the Caribbean, including a residency at the former Fitzgeralds Casino in downtown Las Vegas. In 2009, Jeff helped launch the Punchliner Comedy Club chain for Carnival Cruise Line, where he's known as Jeff "the Fun Dude," and was the club manager and house MC on the Carnival Dream until his return to full-time standup in August of 2017.