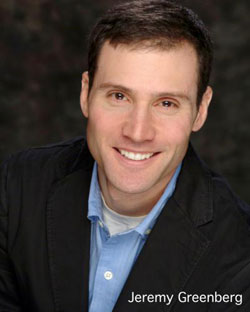 Jeremy is an internationally headlining stand-up comedian, author, blogger, and joke writer. He has appeared on numerous national TV and radio shows, and has done five overseas tours to perform for our troops.

Jeremy has also been a contributing joke writer for The Complete Idiot’s Guide to Jokes (Alpha/Penguin), and Comics Unleashed with Byron Allen.

And if that weren’t enough, he’s also the author of

2. Sorry I Peed on You (And other heartwarming letters to Mommy) (Andrews McMeel, spring 2011),

4. Sorry I Pooped in Your Shoe (And other steamy love letters from puppy and doggy) (Andrews McMeel, fall 2011).

Additionally, he is read by millions each day as the blogger for MSN’s The Family Room, and was part of the team that helped MSN win the 2010 IMA Outstanding Achievement Award for the category of “blogs.”

When Jeremy is not performing or writing, he is at home in San Diego demonstrating alpha-male behavior to his twin, two-year-old sons—mostly by saying “Whatever” and leaving the room every time his wife says that he’s incorrectly loaded the dishwasher.