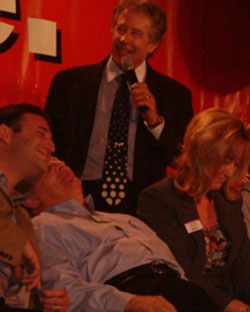 Be it live TV, or a cabaret audience, John presents STAGE HYPNOTISM as the ART it really is.

TV first discovered John while he was a student at the U-Cal, Berkeley. John was demonstrating in the Psych Lab, perfecting memory ("mnemonic") systems.

He trained himself to quickly memorize the complete contents of magazines, 100 digit numbers, and calendars for an entire century.

His seminars on "Speeding Up The Learning Process" were an instant hit in schools and colleges. John quickly added hypnotic techniques to his night club show and became known as "The World's Fastest Hypnotist"; stunning the world with techniques never seen before.

Overnight, he was in great demand for American and foreign tours, and his shows were completely sold out two years in advance. His wide range of hilarious performances feature speed techniques, waking suggestion and spectacular post-hypnotic effects unique to the history of STAGE HYPNOTISM. His shows are ORIGINAL. Not clones of someone else's act. And they're hilariously funny!

He instinctively adapts his program to each individual audience. His clever ad-libs and humorous interactions with volunteers have made him known to clients all over the world as the master of tasteful comedy and hypnotic influence.

Corporations such as IBM, Cargill, General Mills and 3-M are among his clients, along with hundreds of smaller companies.

His shows have received standing ovations from Eastern Europe to the West Indies, from Latin America to Japan, where he amazed and astounded a large corporate audience at Kawaguchiko Daiichi Hotel near Mt. Fuji. John was renewed 9 years at the Western Idaho Fair, drawing crowds of thousands. His hypnosis sessions with the Minnesota Timberwolves are perennial also.