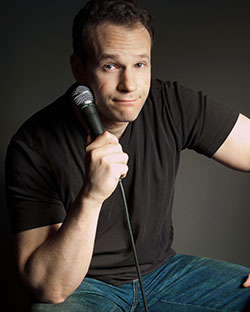 John Ziegler is a comedian from Long Island, NY. After careers as a counselor, an elementary school teacher, a consultant, a salesman, a personal trainer, a gym owner, a club manager, and several others that didnt make the resume cut, John decided to pursue his childhood dream of becoming a stand -up comedian.

Luckily for him he loved it because there was no plan B! As a single, never married adult John finds his humor in the world of dating and his observation of other married people. In addition to being a self proclaimed relationship expert John also finds himself to be an authority regarding the work place. The youngest of six children from a Jewish family growing up in an Italian/Irish Catholic neighborhood has given John a unique perspective which has him confused till this day.

He recently won the “Funniest comic on the East coast” contest at the Mohegan Sun Casino. He’s a bright rising star you’re sure to hear more things about.