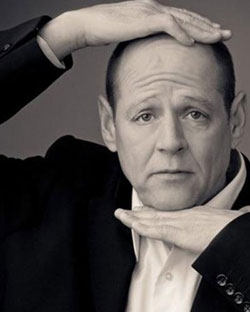 Keith set aside a career working as a stock broker in New York and Los Angeles to pursue his lifelong dream of being a stand-up comedian and has never looked back.

Performing at comedy clubs from coast to coast and nearly everywhere in between, Keith became the definition of a "road comic", spending on average 44 weeks a year performing at clubs all across the country.

Keith developed a routine of smart, quick-witted comedy that quickly landed him headlining gigs at numerous comedy clubs as well as spots performing on national TV and radio programs.

Keith Stubbs' has gained a loyal following of listeners eager to tune in every morning to "The Stubbs Show" for their daily dose of comedy.

He is also an accomplished musician and actor recieving much acclaim and awards for his portrayals. Keith currently lives in Utah with his wife and four children and is generally happy.