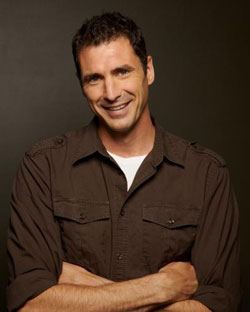 Raised on a farm in the heart of Canada, Leland quickly learned that shovelling manure and weeding potatoes, although lucrative, wasn't his passion in life.

So with absolutely no clear direction or vision for his future he did what everyone does when they find themselves in that position - he went to University. He wisely chose his classes based on whichever cute girl happened to catch his attention and after several short years of last minute cramming and late assignments Leland graduated from the University of Saskatchewan with a degree in Anthropology.

As you might have guessed, Leland's university education opened many doors for him in the years to come, but for some reason he was dissatisfied working for a courier as a night shift stock boy. By this time married and with his first child soon on the way the most responsible and obvious choice was, of course, to pursue a career in the entertainment industry.

Starting off at amateur nights and seedy bars Leland decided right from the beginning that he would remain clean despite what the audiences wanted and over the last 14 years his unique intelligence and wit Leland has carved out quite a niche for himself in the world of entertainment. Using his farm boy charm and handsome (although somewhat inbred) Mennonite good looks, Leland's clever observations and rich life experiences are brought to life in a one of a kind show.