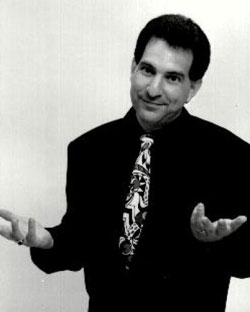 A former aerospace engineer, Mark is one of the few comics able to transition from nightclubs to suit-and-tie events

Described in the press as "funny without being vulgar or nasty" and "going the smarter, hipper direction to the joke" the warm stage presence and stand-up talents from this first-generation American help his routines play authentically; from his immigrant family to the aggravations of modern life; from current events to the fragility of the male ego. There's even a little bit of music tossed in for good measure!

Mark regularly performs at clubs, colleges, and corporate events across North America and can been seen from Las Vegas to the Bahamas; from Canada to Cruise Ships.

His comedy is clever, thoughtful, and most importantly, hilarious! It doesn't take a rocket scientist to find great comedy! Just ask for Mark Matusof!