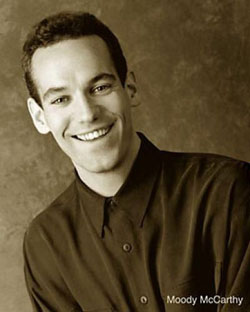 A versatile act that you can take home to your folks or to your gang initiation.

Moody McCarthy has been a stand-up this entire millennia plus some of the last one.

Now - with network TV credits and a night license - he's more in demand than ever.

Based out of New York, Moody's become a fave at clubs everywhere by touting the allure of women with raspy voices, the joys of time zones, and the perks of being an uncle.

No gimmicks, just jokes: this lad sets-up & punches for up to 53 minutes. And don't let the spiffiness fool you - Moody's no candyass!

"Moody McCarthy is an example of why the Irish are famous for their wit. He's hilarious and he classes up our agency" -Keith Barany