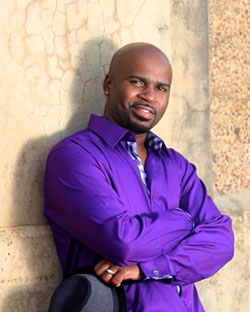 Rahn Hortman is finding that seasoned comedians enjoy his work and call it "refreshing" and "a departure from the norm". But nothing about Rahn's journey to the world of stand-up comedy has been normal.

Rahn has a unique blend of profanity-free banter, with pointed observations about everyday people that leave no one safe.

Since relocating to Tampa, Rahn Hortman has become a crowd-favorite at comedy hotspots such as The Improv and Sidesplitters. He is the champion of the W-MOR TV Channel 32 Comedy Challenge, and finished first out of seven finalists in the Seminole Hard Rock Hotel & Casino Jokers Wild Contest. His reputation for clean material has allowed him to perform for church functions, private engagements, and even corporate events.

Rahn spends his time away from the stage with his wife, Tynise. They have four children: Rahn Jr., Ryan, Raylon, and Rionna, all of whom pray that the next child will be sponsored by the letter "S"!

All jokes aside, two of Rahn's children suffer from the devastating condition of sickle-cell anemia. Rahn would like to use his gift of comedy as an outlet to educate the masses about the disease, and has a goal to become its national spokesperson.