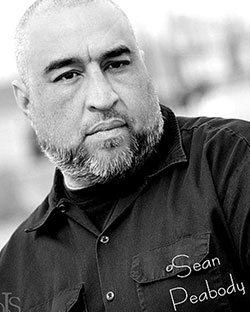 He is often mistaken for the bouncer…until he takes the stage. With a magnetic personality Sean P makes the audience his own. Immediately likable, his stories will make you feel like you were there. Don’t let his relaxed style fool you, he will come out blazing and have you laughing until your whole body hurts.

Raised in the San Fran Bay Area, with a Polynesian background, Sean is a veteran of the United States Marine Corps where he first started cracking up groups. As an instructor on the shooting range his philosophy was “better to have them happy when they have loaded weapons!

From performing clean comedy shows to working blue, Sean can adapt to it all. His comedy is high energy from beginning to end no matter what style of comedy. Crowd work is his specialty and any audience member having seen Sean will feel like they’ve been part of the show. Sean is a performer for all ages and everyone to enjoy.

Sean has performed all over the world including for the troops overseas. He has enjoyed working with comedy greats before him such as Robin Williams, John Witherspoon, Tommy Davidson, Bobcat Goldthwait, Jimmy Walker and many, many more.