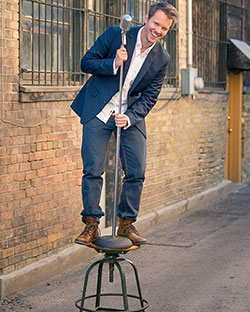 Steve started performing stand-up comedy in 2007 as a New Year’s resolution. Since then he has performed on both coasts and a few places in between for crowds as large as 2,500 and as quaint as 7.

Shy and quiet at parties Steve does comedy because he needs attention. Known for his likeness to actor Kevin Bacon, Steve tries to distract you from his face by talking about his painfully nice parents, being attacked by a homeless man's sandwich, and the effects of a radioactive cat bite.

His comedy is intelligent, subtly sarcastic, and asinine with each show gaining fans and emails from good people and fist bumps from people who do that kind of thing. A Seattle native he recycles, never uses an umbrella, and loves dogs.