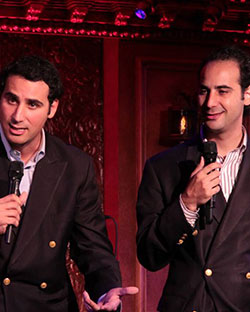 Adam and Todd Stone were born in New York City.

They discovered that their personal chemistry translated to hilarious onstage chemistry in college. But full disclosure: being twins, they'd met well before then.

Adam and Todd Stone have portrayed recurring roles as The Henchman in the web series “Penelope Princess of Pets” joining the acclaimed comedy duo of Kurt Braunohler and Kristen Schaal and comedian and musician, Reggie Watts.

The Stones are working on a new web series called “Going Both Ways.“ It has been accepted into and presented at several prominent festivals around the US.

The Stones have made numerous comedic short videos featured on the web. They also starred as principals in a national Verizon FiOS commercial.

The Stone twins have performed in many of the most prestigious comedy clubs in the U.S., including Carolines on Broadway, Gotham Comedy Club, The Laugh Factory, New York Friars' Club, Stand-Up NY and the Upright Citizens Brigade Theatre.

The Stones are both members of the New York Friars' Club.

They are an instantly likeable duo with a bright (mutual) future. Watch and you’ll see why.