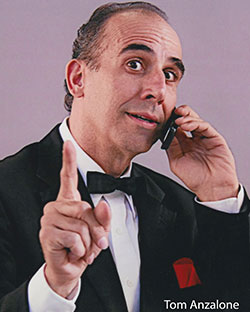 Tom Anzalone is a comedian, entertainer, musician and teacher who uses his talents to delight audiences of all ages.

Classically trained in Opera at West Virginia University, Tom began his career performing in musicals and operas while pursuing his stand-up comedy routine. Tom has performed in venues of all sorts across the country and internationally.

But it is off-key creativity that spawns his usual standing ovation. His Springsteen recites the alphabet (to the tune of "Born In The U.S.A."), his Pinball Wizard (from the rock opera Tommy) is sung, well, opera style.

Tom Anzalone consistently hits the right notes for any audience.

His television appearances include America's Funniest People (ABC) and the Showtime Comedy Club Network. In addition, he has been profiled on radio's All Things Considered (NPR).

He has performed at Atlantic City's and Las Vegas' Tropicana Hotels and in more than forty states. In addition, he has entertained passengers on the Carnival and Royal Caribbean cruise lines.

And he’s enlisted for Comics on Duty, a series of shows for troops stationed stateside.