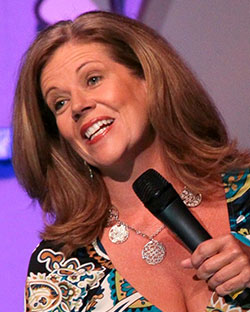 With a personality just sweet enough to offset the bitterness of the truth, Tracy dishes out bellies full of laughter big enough to choke on.

Tracy is a well- respected voice in stand up, with a list of international television credits which include her own hour long special on Canada’s Comedy Network, as well as critically acclaimed half hour special for Comedy Central.

She has toured with the Bob and Tom Radio Show Allstars, and has been a writer and consultant for the one and only Roseanne Barr. She has been touring for the better part of two decades and she knows her way into an audience’s hearts and minds.

The Los Angeles Times says Tracy is “Blonde and buxom with material as tight as her skirt”.  “I laughed my ass off” said Roseanne Barr. Variety Magazine called Tracy “One of the Top Ten Comics to Watch”.  This is a must see show.